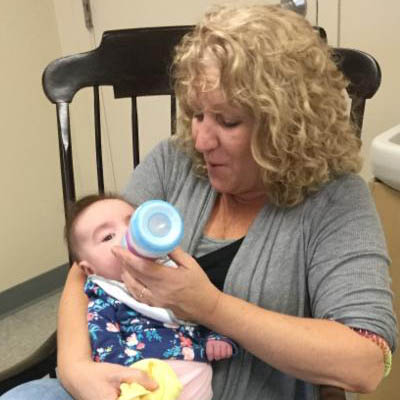 When you walk into the infant room you will often find Jean Soul sitting on the bright rug engaged with the babies, playing and talking with them at their level. Jean has been working in the infant room for 4 years now and in fact she has been at the center the longest of all our teachers. She came with many years’ experience in the field, as a teacher’s aide at her own children’s elementary school in Carver and as a preschool teacher for 12 years at the Pilgrim Childcare and Preschool in Duxbury.

“I always wanted to work with children,” says Jean. “I love being with the infants because you can watch them change and grow every day.” When she first arrived, Jean initially was hoping for a position with the preschoolers but there were no openings at the time so she started in the infant room. As it turns out, the infants more than won her over. “I wouldn’t be anywhere else now,” she says. “This is the way to spend the day—with little children who want you and need you, and their parents are appreciative too.”

Jean likes the relatively small size of the Methodist Early Learning Center and finds it welcoming and great for everyone that the teachers at the center know all the children in all the rooms. She says that it’s also nice that babies in the infant room see their older siblings who are now preschoolers. Obviously proud of all of her youngsters, including those who have advanced to other rooms at the center, she notes, “At this point I have siblings whose parents have had a second baby.”

With five grown children and eight grandchildren between the ages of 1 and 10, all who live in the area, Jean and her husband have a full life outside of school. They babysit on weekends and attend the grandchildren’s sporting events.